Why R2 need to adjust

R-square and adjusted R-square values are the two most used parameters for evaluating a regression model. In this discussion we are going to see the difference between both parameters and when to use which, so let’s start with a brief introduction of the parameters:.

The value of R2 ranges from 0 to 1 or 0 to 100%, and R2 of 1 means that the total variation in the dependent variable is fully explained by the independent variable. R2 is directly proportional to the correlation between the independent and dependent variable. We can say that higher the correlation, higher the R2 value and better the model will perform. Practically the value of R2 will become zero when the regression model will start performing like the averaging model. We can visualize the regression model with the below figure. 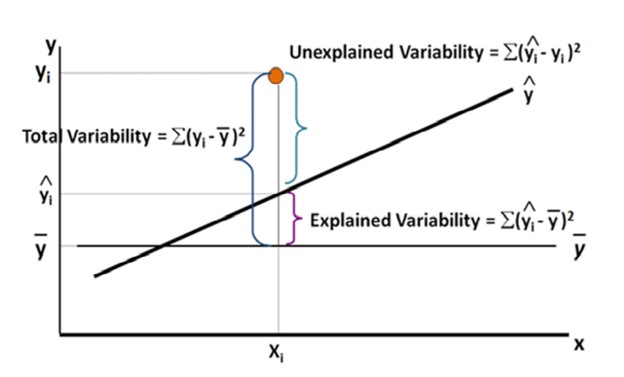 The equation of R2 is given as:

SSR = The sum of residual errors(Unexplained variability in fig.)

SST =  The total Variation of the points (Total variability in fig.)

The equation of Adjusted- R2 is given as:

The reason behind Adjusted R2 giving the better approximation of the model is the factor that it considers the degree of freedom of the model and then calculates the final value of the effect of variables.

So, when it comes to assess the goodness of a regression model after adding some new predictive features, we prefer to use Adjusted R2 to get a proper impact analysis of the feature on the model or the dependent feature. For a single independent variable, the R2  and the adjusted R2 provide almost the same results.